Effects of breed, age and season of the year on fertility in the bitch.

Many of the early studies on canine reproductive physiology were done on research colony dogs, usually Beagles, which did not lead a normal dog’s life. We wanted to study reproductive patterns and reproductive problems in bitches of several breeds and from private dog owners and breeding kennels. This presentation is based on 4 separate studies on reproduction and reproductive problems in 17 different breeds of dogs registered with the Swedish Kennel Club (SKK). The aims of the studies were to determine whether the season of the year influences when bitches of different breeds are mated, and whether there is a correlation between season, litter size, number of stillborn pups, or the duration of pregnancy. Furthermore, we wanted to examine the effects of age and parity of the bitch at the time of whelping on litter size. We also studied whether the duration of pregnancy varies with breed, and if the number of pups in the litter influences the duration of pregnancy. Whelping rate by natural mating, and frequencies of dystocia and Caesarean section were also noted for 4 of the breeds.

Data was obtained from the SKK data base (www.skk.se) for information about litter registrations, and from the submitted registration forms for date of matings and number of pups born, and questionnaire surveys were sent to breeders for details about the kennels, oestrus cycles, matings and whelpings, reproductive problems etc. The year was divided into 4 seasons (Dec-Febr, March-May, June-Aug, Sept-Nov). The GLM procedure was used and data given as LSMEAN. The statistical analyses were performed by X2-analyses (variation between breeds for seasonal distribution of matings, and between seasons for all matings), Spearman rank correlation for estimating the association between gestation length and litter size, and analysis of variance to study the effect of breed and season on gestation length. P<0.05 was considered as significant. (For more detail see references).

Data from a total of 2,469 litters registered in 2004 from 13 breeds of dogs was analysed in one of the studies (Table 1). For Swedish Lapphunds (SLH) and Finnish Lapphunds (FLH) a total of 718 litter registration forms from the years 2000-2007 were also used, together with data from 30 breeders on 30 SLH and 28 FLH bitches. Data on 2,717 litters of the Swedish Drever breed during 1995–2006, were analyzed together with more detailed data from a private kennel of Drevers, with a total of 285 matings and 224 whelpings, during the same time period. For the Chow-Chows information about 354 matings during 1997-2004 were analysed, and two complementary questionnaires sent out to breeders.

Season. A seasonal variation in mating frequency was found for 11 of the studied breeds, but in different ways. In Drevers, FLH, German Shepherd dogs, Irish Soft Coated Wheaten Terriers, Labrador Retrievers and Norwegian Elkhounds most matings took place during winter, in Golden Retrievers during winter and spring, in Beagles during spring, and in Basenjis, Chow-Chows and SLH during autumn. Over all, significantly more matings occurred during winter, with spring in second place, and with no difference between summer and autumn (Fig. 1). The differences found between breeds indicate a genetic basis for seasonality among domestic dogs, even though environmental factors and human preference also interferes with their reproductive pattern. In the Drever breed litter size was significantly larger in litters from matings during the winter season when also most of the Drever bitches were mated. This coincides with the mating period among the wild carnivores i.e. foxes and wolves in Scandinavia. In contrast, in the Chow-Chow, which despite that 86% of bitches cycles twice a year mainly is an autumn breeder, the largest litters were born in December (4.7/4.1 pups) and the smallest in March (2.9/2.3 pups). According to the Kennel Club data from 1996-2003, 60.4% of Chow-Chow pups are born in Oct – Dec (48.9% in Oct/Nov)(Fig. 3). In the majority of other breeds in Sweden most litters are born during spring (Fig. 4). An exception is the Basenji which is more strictly seasonal with usually only one oestrus cycle per year and 84% of pups born in Nov – Jan (53% in Dec)(Fig.4). 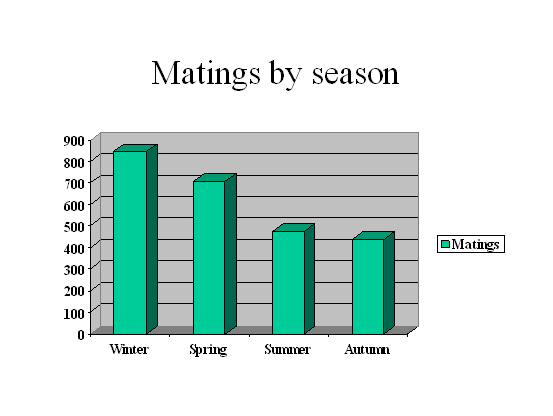 Figure 1. Seasonal distribution of 2469 matings in 13 breeds of dogs.

In a previous study on results from artificial inseminations (AI) a seasonal variation in whelping rate was also observed, with the lowest whelping rates from AIs performed in July. (Fig. 2). 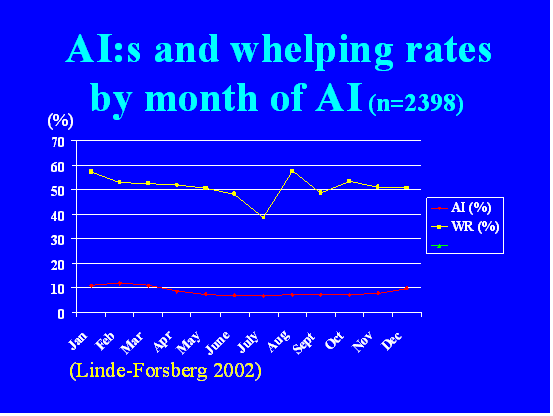 Influence of age of the bitch on litter size: Bitches giving birth to a first litter after 4 years of age produced a smaller litter than younger first whelping bitches. Litter size at the time of birth increased from the first to the third litter, and significantly decreased after 5 years in all bitches. Bitches giving birth for the first time had a smaller litter size and a higher pup death rate than multiparous bitches. Thus the optimal age to mate a bitch appears to be when it is 3-4 years old.

Influence of litter size on gestation length. An influence of litter size on duration of pregnancy was demonstrated for 9 of the studied breeds. Litter size was negatively correlated with duration of pregnancy. Each pup more than average for the breed caused a shortening of the gestation by 0.25 days, and each pup less a corresponding lengthening. It is likely that the number of observations was too small and the variation in litter size too low to demonstrate this influence in the remaining 8 breeds.

Influence of breed on gestation length. Gestation length varied significantly between breeds, being shortest in the cavalier King Charles Spaniel (61.11 days), and longest in the Beagle (62.52 days)(P<0.001). (Table 1).

Table 1. Gestation length (GL) and litter size in 13 breeds of dogs, and Spearman correlation between gestation length and number of pups for breeds represented by >100 litters

Breed differences in gestation length have not been previously described, only anecdotally referred to among breeders.

Whelping rates and dystocia. A whelping rate of 80-90% is considered normal under ideal conditions. The situation among hobby breeders, and for different breeds, has been very little studied because only the successful matings, resulting in a litter of pups, are reported to the Kennel Clubs. Information about pup death rates and frequency of dystocia in different breeds is also scarce. Of the 285 mated Drever bitches, 78.6% whelped, 6.25% experienced dystocia, and 5.36% underwent Caesarean section. The pup death rate was 7.6%. In the SLH and FLH whelping rates were 91.3% and 96.6%, respectively. Dystocia occurred in 9.5% of 63 SLH whelpings and 12.3% of 57 FLH whelpings, and Caesarian sections in 1.6% and 5.3%, respectively. Pup death rate was 10.5% in the SLH and 3.7% in the FLH. In the Chow-Chow only 53% of the 354 matings resulted in a litter (Fig. 3), 18% of bitches underwent a Caesarian section, and the pup death rate varied from 6 to 18% between the years.

Oestrus patterns. Regular oestrus cycles were seen in 86.7% of SLH and in 100% of FLH bitches. Silent heats had been observed in 6.7% of SLH and 3.6% of FLH bitches, and split heats in 3.3% of SLH and 7.1% of FLH. In SLH 16.7% of bitches had refused mating on some occasion, compared to 10.7% in FLH. The vast majority of the Chow-Chow bitches, 86%, had 2 oestrus periods per year, and 41% were in oestrus at regular intervals whereas 56% had intervals that varied by 3 months or more. Five of 39 (7.8%) bitches in our enquiry had a split oestrus, or were suspected to have anovulatory cycles. Of the 39 bitches 10% always refused to mate with the male. Strong mating preferences were observed in Chow-Chows. 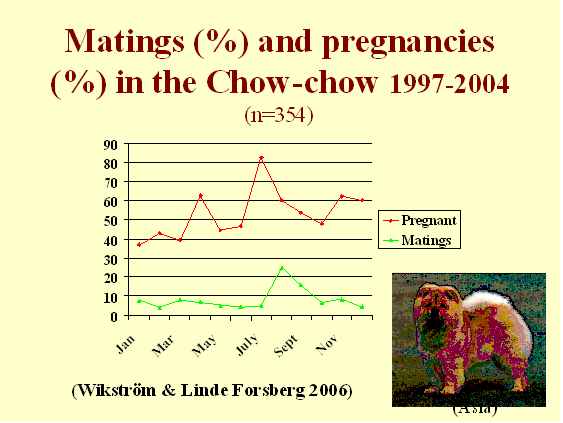 Figure 3. Matings and whelping rates by month of mating in the Chow-Chow. 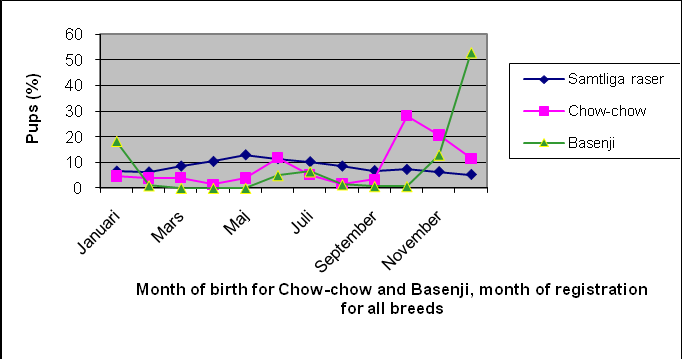 Figure 4. Distribution by month of the year of SKK registrations of all breeds , and of month of births for Basenjis and Chow-Chows .

Conclusions. These new findings on the effects of breed and age of the bitch, and seasonal variation will enable to give breeders better advice on for instance when to mate or inseminate bitches and to estimate the day of parturition.

You will get multiple dog discount on the storage fee: